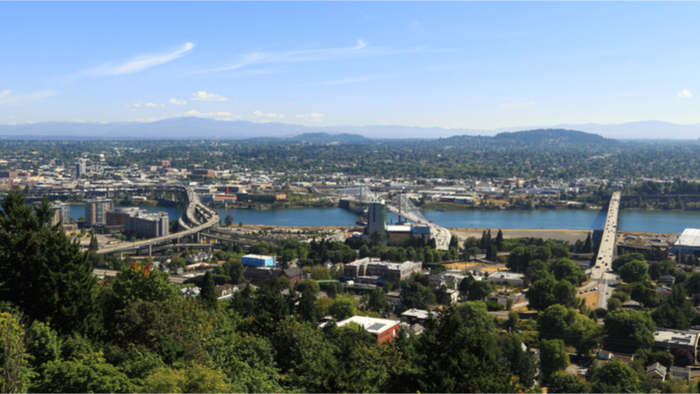 • Who stands to benefit most from community trusts like Plaza 122? What are the barriers to starting similar trusts in other areas threatened by gentrification and rising costs of living? What resources would be necessary to overcome these barriers?

Every morning Elizabeth Guerrero starts doling out breakfast burritos and shots of espresso through the window of La Osita. Her food cart sits at Plaza 122, an unassuming strip mall in a part of Portland, Oregon, far removed from the quirky boutiques lovingly satirized in Portlandia sketches.

The storefronts and offices in Plaza 122 reflect the surrounding neighborhood: multilingual tax preparers; the Somali-American Council of Oregon; a Russian lotion shop; a security firm; a cab company; a hair salon.

What isn’t apparent briefly passing by is that Plaza 122 is an experiment that hopes to keep the existing community from being displaced by gentrification. The businesses that operate there are independently owned, but the property belongs to the East Portland Community Investment Trust (CIT). Guerrero, other shop owners, and more than 100 others are invested in the CIT, early adopters of a program intended to help the asset-poor accrue equity and a sense of community ownership.

Anyone of voting age in the surrounding four zip codes can invest $10, $25, $50, or $100 a month, and, today, 114 people have invested a total of $50,200. Mailing address boundaries on investment are designed to ensure that only people in the immediate community are investors, and the $100 cap prevents anyone with enough capital from buying up all the shares.

Although anyone can cash out without penalty at any time, more than 95 percent of investors have kept their money invested since the trust opened. The trust was designed for widespread and sustained impact, with 45,000 shares available to an estimated 300-500 people over a roughly five-year span. Once investors buy out the subordinated debt from Mercy Corps and the impact investors, the community will own Plaza 122, and hopefully help guide its future by sitting on its board of directors.