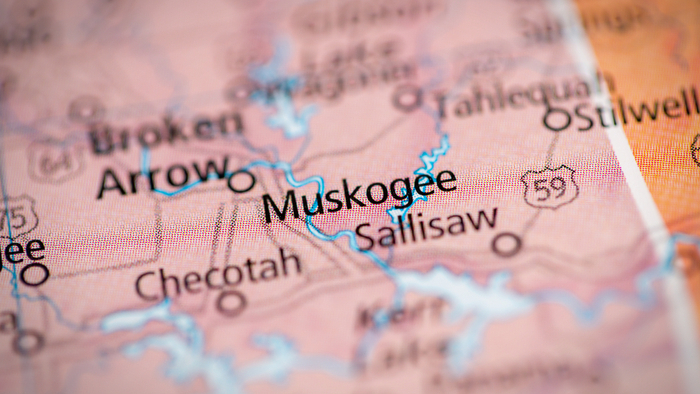 • Cary Aspinwall and Graham Lee Brewer, at The Marshall Project, investigate how criminal justice in Indian Territory in Oklahoma has been affected by a recent Supreme Court ruling.

• Read more about the long-awaited court ruling for the Muscogee Nation.

The court ruled July 9 that much of eastern Oklahoma is Indian Country. That means tribal law and federal law apply there in criminal cases involving Native citizens—not state law.

The Supreme Court ruling is a long-awaited triumph for the Five Tribes, which were forced from their homes and onto the Trail of Tears in the early 1800s.

But questions remain about what the decision means for the quality of justice in Indian Country, for Natives and non-Natives. An unknown number of tribal citizens who were convicted of felonies in state courts can now seek to be retried in U.S. District Court in Tulsa or Muskogee, Oklahoma.

It’s not entirely clear how prosecutions will work, because of tension between the state and the tribes over what is best for both public safety and tribal sovereignty. And there are questions about how federal prosecutors will handle what could be an influx of unfamiliar legal cases.

When it comes to the legal system, tribes ultimately want to regain their power to administer justice according to their own laws and traditions, said Sarah Deer, a legal scholar on criminal justice in Indian Country and a citizen of the Muscogee (Creek) Nation.

Even after the Supreme Court decision, tribal courts in Oklahoma and on reservations across Indian Country rarely have the authority to try felony cases and have very limited authority over people outside the tribe even in incidents that occur on tribal lands.

Now, the U.S. attorney’s offices will have to handle serious crimes, including murder and assault, as their peers do in cases involving tribal reservations in more than a dozen states. Critics note that the Justice Department has had a long history of documented lapses in handling cases in Indian Country.

Read the full article about criminal justice in Indian Territory by Cary Aspinwall and Graham Lee Brewer at The Marshall Project.

If you are looking for opportunities to learn and connect with others interested in the topic of Criminal Justice, take a look at these events, galas, conferences and volunteering opportunities aggregated by Giving Compass.

If you are interested in Criminal Justice, please see these relevant Issue Funds, Charitable Organizations or Projects where you can get involved.