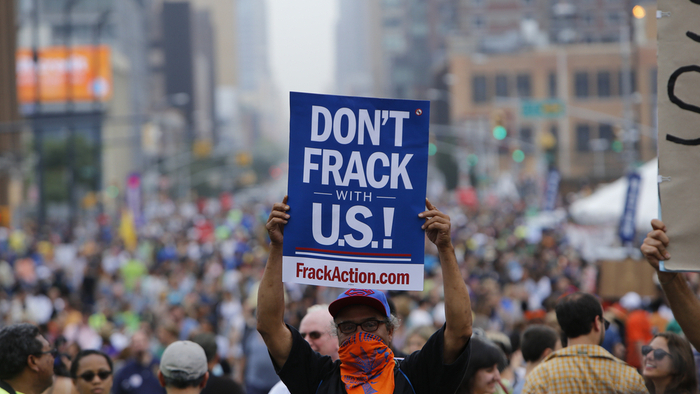 • Greta Moran at Grist discusses how activists in New York successfully were able to shut down big interstate pipelines in New York and beyond.

• How can investors and philanthropists help this type of activism? How can we as a civic duty help support more clean energy bills?

• Learn how to increase the impact of social movements.

If all had gone according to plan, the Constitution pipeline would be carrying fracked gas 124 miles from the shale gas fields of Pennsylvania through streams, wetlands, and backyards across the Southern Tier of New York until west of Albany. There it would join two existing pipelines, one that extends into New England and the other to the Ontario border as part of a vast network that moves fracked gas throughout the northeastern United States and Canada.

For a while, everything unfolded as expected. When the Federal Energy Regulatory Commission approved the project in 2014, the U.S. was in the midst of a fracking boom that would make it the world’s largest producer of natural gas and crude oil. Williams Companies, the lead firm developing the project, was awaiting state approval of environmental permits — a largely perfunctory move at the time — and so sure everything would fall into place that it had started clearing hundreds of trees under armed guard along the pipeline’s route.

Yet the developers did not anticipate landowners, neighborhood residents, community leaders, and anti-fracking activists statewide forging a coalition to kill the pipeline. In a landmark defeat, New York’s Department of Environmental Conservation denied the project’s water-quality certificate in 2016, leading Williams to abandon it in early 2020. The land slated to be cleared, the communities fated to be disrupted, and the waterways destined to be disturbed were preserved by a movement that was far from done.

Read the full article about shutting down pipeline projects in New York by Greta Moran at Grist.