How Invasive Plants Play a Role in Sparking Wildfires 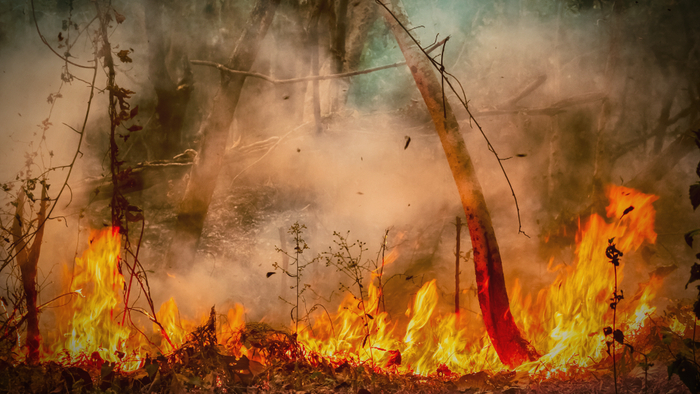 • Researchers have found that invasive species can contribute to wildfires, and explain why it is essential to include invasive grasses into fire risk models.

• How will this research help inform wildfire disaster relief planning?

• Read about how wildfires have and will continue to shape our future.

The Santa Ana winds that help drive fall and winter wildfires in California have died down, providing welcome relief for residents. But other ecological factors contribute to fires in ways that scientists are still discovering.

I study how human actions affect fire regimes – the patterns through which fires occur in a particular place over a specific time period. People alter these patterns by adding ignition sources, such as campfires or sparking power lines; suppressing fires when they develop; and introducing nonnative invasive plants.

My research suggests that nonnative invasive grasses may be fueling wildfires across the United States. Some fires are occurring in areas that rarely burn, like the Sonoran Desert and the semiarid shrublands of the Great Basin, which covers most of Nevada and parts of five surrounding states. In the coming months, some of the grasses that help feed these blazes will germinate, producing tinder for future fires.

In a recent study, I worked with colleagues at the University of Massachusetts and the University of Colorado to investigate how 12 nonnative invasive grass species may be affecting regional fire regimes across the U.S. We found that eight species could be increasing fire in ecosystems across the country.

A fire regime is a way to describe fire over space and time or to characterize fire patterns. Understanding fire regimes can help make clear that fire is a natural and integral component of many ecosystems. Knowing historical fire patterns also enables scientists to begin to understand when new or different patterns emerge.

The link between invasive grass and fire is well established. Invasive grasses are novel fuels that can act as kindling in an ecosystem where readily flammable material might not otherwise be present. They can catch a spark that might otherwise have been inconsequential.

Cheatgrass, which fueled the Martin Fire, is a well-studied invasive grass known to promote fire. But many other invasive grass species have similar potential, and their roles in promoting fire have not been assessed at large scales.

A nonnative invasive species typically comes from another continent, has become established, is spreading and has negative impacts. We used an online Invasive Plant Atlas of the United States as a starting point to determine which invasive grass species to investigate.

Next, we searched the scientific literature and the U.S. Forest Service’s Fire Effects Information System to see whether there was reason to believe that any of the invasive grass species promoted fire. This process helped narrow our scope from 176 species to 12 that were suitable for our analysis.

Who are these “dirty dozen,” and how did they get here? Buffelgrass is native to Africa and was intentionally introduced to Arizona in the 1930s, probably for erosion control and forage. Japanese stiltgrass and cogongrass are native to much of Asia and were introduced to the southeastern U.S. in the early 1900s, in some instances as packing material. Medusahead, which comes from Eurasia, was introduced to the western U.S. in the late 1800s, probably by accident as a contaminant in seed shipments.

The remaining eight species – giant reed, common reed, silk reed, red brome, cheatgrass, Chinese silvergrass, Arabian schismus and common Mediterranean grass – have similar stories. People introduced them, sometimes accidentally and at other times intentionally, without an understanding of how they could impact their new settings.

Understanding how multiple species influence fire over many years at a national scale requires using big data. One person could not collect information on this scale working alone.

We relied on composite data sets that provided thousands of records of invasive grass occurrence and abundance across the country. Combining these records with agency and satellite fire records helped us determine whether fire occurrence, frequency or size were different in places with and without grass invasions.

We also used statistical models to assess whether human activities and ecological features could be driving observed differences between invaded and uninvaded areas. For example, it was possible that grass invasions were happening near roads, which are also linked with fire ignitions. By including roads with grass invasion in our statistical models, we can be more confident in the role invasive grasses could play in altering fire regimes.

Our results show that eight of the species we studied are associated with increases in fire occurrence. Six of these species are also linked to increases in fire frequency. Invasions seem to be affecting a variety of ecosystems, ranging from buffelgrass in the Sonoran Desert to Japanese stiltgrass in eastern U.S. forests to cogongrass in southeastern pine systems.

Our statistical models suggest that grass invasion, along with human activities, are likely affecting fire patterns in these ecosystems.

Surprisingly, none of the invasive grass species analyzed appeared to influence fire size. We interpret this result to mean that the areas we studied are seeing more of the same types of fires that already occur there, at least in terms of size.

People start an estimated 84% of wildfires in the U.S., with the rest ignited by lightning strikes. Studies show that climate change is increasing wildfire activity.

With an understanding of interactions between invasive grasses and fire, agencies that handle either fire or invasive species may find opportunities to work together to control invasions that can lead to more frequent burns. Our research can also strengthen predictions of future fire risk by incorporating the presence of invasive grasses into fire risk models.

Although it sometimes may feel as though the world is on fire, this information can provide potential for remediation, and may help communities prepare more effectively for future wildfires.

Learning with others and benchmarking are key steps towards becoming an impact giver. If you are interested in giving with impact for Climate, take a look at these events, galas, conferences and volunteering opportunities to connect with individuals like you.