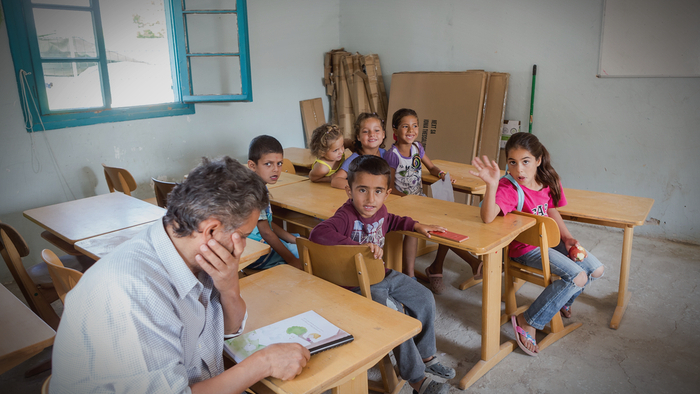 • The International Rescue Committee and the Sesame Workshop are in a partnership to implement a large-scale early childhood intervention program for Syrian refugees to strengthen social-emotional skills.

• What are the benchmarks of success for a program model like this one? How can donors help support large-scale humanitarian responses during the refugee crisis?

• Read about another refugee crisis response centered on education.

The International Rescue Committee (IRC) has teamed up with Sesame Workshop to deliver the largest early childhood intervention in the history of humanitarian response. This is possible because of a $100 million grant from the MacArthur Foundation in 2017, and as of December 2018 additional support from the LEGO Foundation, recognizing that transformational change for children in crisis requires large-scale investments over longer timeframes.

Over five years, through Ahlan Simsim—which means “Welcome Sesame” in Arabic—the IRC will deliver critical early childhood development (ECD) programs in the Syrian response region to refugee and host community families. These programs will target both children and their caregivers and aim to improve the cognitive and social-emotional skills of more than a million children.

Sesame Workshop is also developing a new, locally produced, Arabic-language version of “Sesame Street” designed to support children by strengthening their social-emotional growth. The show, expected to air in early fall, will reach millions of children across the region.

In addition to the direct services and mass media components delivered by the IRC and Sesame Workshop, Ahlan Simsim has the potential to help shift the humanitarian system to focus more on evidence-based educational opportunities for children. In collaboration with NYU’s Global TIES for Children, this includes building global knowledge and capacity around large-scale implementation and measurement of ECD programs, an issue that has been severely under-researched and documented.

Read the full article about early childhood interventions for Syrian refugees by Jenny Perlman Robinson and Marianne Stone at Brookings.

Early Childhood is a complex topic, and others found these selections from the Impact Giving archive from Giving Compass to be good resources.

Learning with others and benchmarking are key steps towards becoming an impact giver. If you are interested in giving with impact for Early Childhood, take a look at these events, galas, conferences and volunteering opportunities to connect with individuals like you.

If you are interested in Early Childhood, please see these relevant Issue Funds, Charitable Organizations or Projects where you can get involved.