Meals From Scratch in NYC Schools Could Be a Possibility 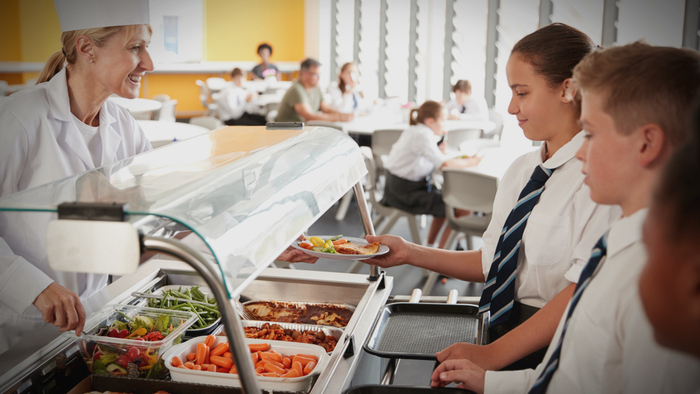 • A report from the Tisch Center for Food, Education, and Policy at Columbia University’s Teachers College indicated that it is possible to make all NYC school meals from scratch while following federal nutritional guidelines.

• The report emphasizes the need for the right investments in equipment, supplies and training and looking toward exemplary school kitchens for direction. How can education donors help with school meal investments?

Preparing fresh, marinated chicken from scratch may not seem like a big deal at home. Now add in hundreds of schoolchildren, federal nutrition guidelines, and a kitchen that needs updating, and it becomes a gargantuan task.

Still with the right investments in equipment, supplies, and training, it’s doable, even for a school system that feeds about 940,000 free meals a day. That was a key finding of a report released Tuesday night from the Tisch Center for Food, Education, and Policy at Columbia University’s Teachers College.

“I think the biggest takeaway is that scratch cooking is indeed possible in New York City schools, which wasn’t assumed,” said Pamela Koch, the principal investigator of the evaluation, which was funded by the city department of education, and donors including the New York Community Trust, the New York State Health Foundation, and the Joyce and Irving Goldman Family Foundation.

Researchers behind the report examined a pilot program at five public Bronx schools that served meals made from raw ingredients, rather than the standard reheated or processed foods served in most city cafeterias. (Several schools use alternative menus that offer some foods prepared from scratch, such as slow-roasted carrots and vegetable rice.) The pilot, highlighted by The New York Times earlier this year, was a partnership between the city’s Office of Food and Nutrition Services, or OFNS, and Brigaid, a school food consulting company.

The goal of the program evolved over time — from seeing how individual kitchens could implement scratch-based cooking to figuring out how to introduce some of these meals across the city while adding more schools to the pilot.

Going forward, the team suggests steps to expand, which include gathering support for scratch-cooking within the education department and then increasing the number of kitchens that use full menus with foods prepared from scratch, allowing others to observe how it’s done.

Read the full article about school meals cooked from scratch by Reema Amin at Chalkbeat.

Children and Youth is a complex topic, and others found these selections from the Impact Giving archive from Giving Compass to be good resources.

If you are looking for opportunities to learn and connect with others interested in the topic of Children and Youth, take a look at these events, galas, conferences and volunteering opportunities aggregated by Giving Compass.