Poverty Is Double the National Average Near MLK Streets 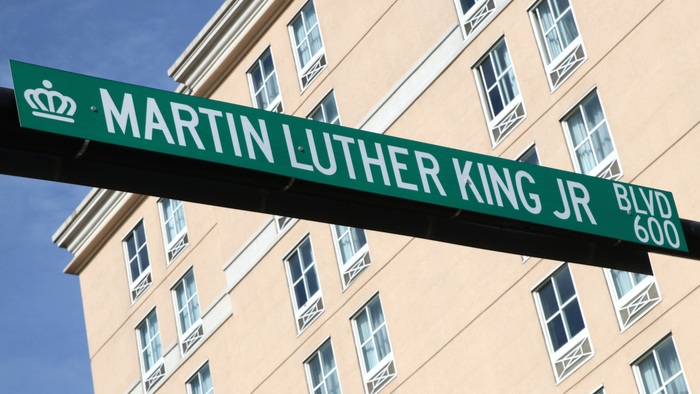 Poverty rates are almost double the national average in areas surrounding streets named after Martin Luther King Jr., according to our recent study, and educational attainment is much lower.

Our geography research, published in the GeoJournal in September 2020, analyzed the racial makeup and economic well-being of 22,286 census blocks in the U.S. with roadways bearing the slain civil rights leader’s name. Streets named after Martin Luther King typically run through multiple census blocks; we identified a total of 955 such streets in the United States.

The areas surrounding MLK streets are predominantly African American, with very few white residents, we found. This is particularly true in the South and Midwest. A notable exception includes California, where MLK neighborhoods have seen a recent increase in their Latino population.

American cities began naming streets for the Rev. Martin Luther King Jr. after his 1968 assassination to commemorate the civil rights movement and King’s fight against social inequality. Chicago was the first. In 1968, Mayor Richard Daley renamed 14 miles of Grand Boulevard, in the historically Black South Side, as Martin Luther King Jr. Drive.

According to the University of Tennessee geographer Derek Alderman, the streets that bear his name were selected from areas that have higher African American populations than citywide averages. MLK avenues, boulevards and drives are, the journalist Jonathan Tilove once wrote, “Black America’s Main Street.”

Most of America’s MLK neighborhoods, from east Montgomery, Alabama, to Harlem in New York City, were born of legal or de facto racial segregation. And in the second half of the 20th century, they experienced the sharpest decline in urban industry, sending local jobs from the cities to suburbs.

These historic events first caused, then structurally perpetuated, deprivation in MLK neighborhoods. Concentrated urban poverty affected the funding required to support schools, hospitals and other community services, especially after the economic recession of the 1970s. In many cities, the sinking socioeconomic status of African Americans was compounded by government neglect of their neighborhoods, leading to property devaluation, industrial pollution and disrepair.

The result is that MLK neighborhoods have become what Alderman calls a “racialized” landscape. Systematically ignored for investment and government services, they are now negatively stereotyped as marginal places where poverty, disorder, dereliction and crime are considered normal.

What other research is being done

Our study builds on Alderman’s 2000 investigation on MLK streets by revealing that the neighborhoods around them are highly racially segregated.

But they are also vibrant commercial districts.

In 2007, geographer Matthew Mitchelson and co-authors analyzed businesses on streets named after King, examining their numbers, annual sales and staff size. His study concluded these businesses are comparable in terms of revenue and jobs provided to those located on other commercial arteries – namely, Main Streets and streets named after President John F. Kennedy.

Research on urban resilience suggests the marginalization of MLK neighborhoods could make their residents more vulnerable to natural disasters and pandemics like the coronavirus, but this connection has yet to be studied.

Finally, the arrival of Latinos to MLK neighborhoods left us wondering: Will increasing diversity bring an end to the negative stereotyping of these areas – or simply change those stereotypes?

If you are looking for opportunities to learn and connect with others interested in the topic of Economic Dev, take a look at these events, galas, conferences and volunteering opportunities aggregated by Giving Compass.

If you are looking for opportunities to take action and give money to Economic Dev, here are some Giving Funds, Charitable Organizations and Projects aggregated by Giving Compass where you can take immediate action.