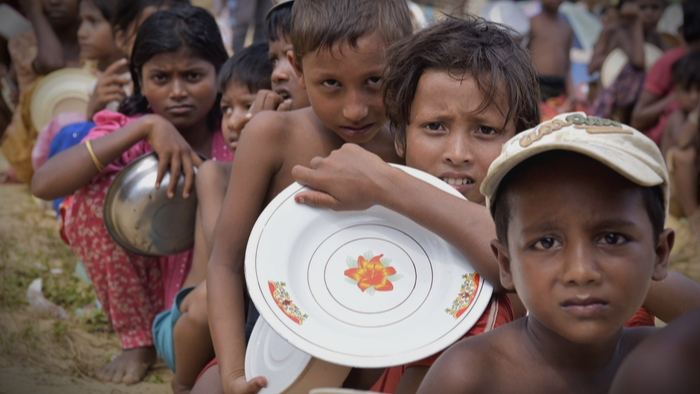 • Arunn Jegan, writing for Doctors Without Borders, describes the Rohingya refugee crisis and the state of the camps in Cox Bazar, two years after the Rohingya fled Myanmar.

• Jegan believes that although conditions in the camps have improved, humanitarian relief programs should not be scaled down. How should foreign aid groups respond?

• Read about the struggle for Rohingya children who have no access to education.

I first came to Cox’s Bazar in June 2017, at a time when thousands of Rohingya were already in Bangladesh having fled previous waves of targeted violence in Myanmar.

Even then, the needs were massive. I returned as project coordinator that August, as hundreds of thousands more people arrived.

It was obvious the Rohingya were fleeing violence – in one two-week period between August and September 2017, we watched pillars of smoke, most likely from houses and villages being burned, at several points across the border.

They settled in camps that were already well below basic living standards, and where there had been very few aid organisations working previously.

Two years on, there are now better roads, more latrines and clean water points in and around the camps. There is more sense of order. However, conditions in the camps remain precarious and big questions about people’s futures are still unanswered.

There is no legal way for the Rohingya to work in Bangladesh, which contributes to massive social, economic and financial pressure. Education provides a path for any community to sustain and advance themselves, but Rohingya children aren’t allowed formal schooling. Access to specialised care is another big issue – there are healthcare services available, but with limited freedom of movement, the level of care required is often out of reach. Mental health also remains stigmatised within the Rohingya community, as in much of the world.

Amid all the uncertainty, one thing is clear. This is not the time for the humanitarian response to scale down.

Over 912,000 Rohingya are now in Bangladesh. We need to be talking about what we are doing for this population’s future, in Myanmar and countries hosting the Rohingya, like Bangladesh.

And yet, short-term thinking continues for a long-term problem.

Read the full article about Rohingya refugee crisis by Arunn Jegan at Doctors Without Borders.

If you are looking for opportunities to learn and connect with others interested in the topic of Immigrant Refugee, take a look at these events, galas, conferences and volunteering opportunities aggregated by Giving Compass.

If you are interested in Immigrant Refugee, please see these relevant Issue Funds, Charitable Organizations or Projects where you can get involved.