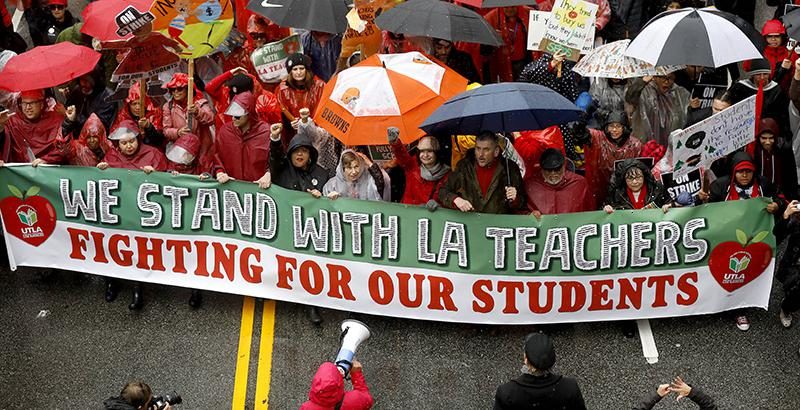 · How can funders help states to avoid teachers strikes? What will it take to end this strike?

Teachers went on strike Monday in Los Angeles for the first time in 30 years, driving down attendance at many schools as parents wrestled with whether to bring their children past picket lines — if they could afford the choice to keep them home.

Thousands of protesters weathered heavy rain to picket outside schools before heading to a march in downtown Los Angeles. Union leaders continued to call for bolstered classroom investments, while L.A. Unified re-emphasized its “desire to find a solution to the UTLA strike as soon as possible.” Online, the Twitterverse — including political figures such as Democrat U.S. Sen. Kamala Harris — seemed to largely side with the union’s efforts.

United Teachers Los Angeles on Friday rejected the district’s latest offer, which would invest $130 million to lower class sizes and add 1,200 new staff members — teachers as well as nurses, counselors, and librarians. The district is offering a 3 percent raise retroactive to 2017-18 and a 3 percent raise for this year. UTLA wants a 6.5 percent retroactive raise, a full-time nurse in every school, more special education teachers, and expanded charter school oversight, among other demands.

Read the full article about LA’s teacher strike by Taylor Swaak, Esmeralda Fabián Romero, and Laura Fay at The 74.

Employment is a complex topic, and others found these selections from the Impact Giving archive from Giving Compass to be good resources.

In addition to learning and connecting with others, taking action is a key step towards becoming an impact giver. If you are interested in giving with impact for Employment take a look at these Giving Funds, Charitable Organizations or Projects.