The Missouri River Braces For Another Year Of Flooding 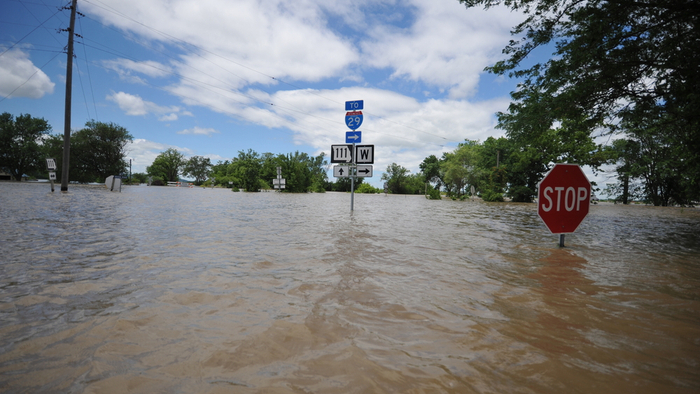 • Frank Morris reports how forecasters are warning everyone living along the Missouri River to brace for more flooding this year.

• What are donors doing for disaster relief efforts against flooding?

• Learn about the midwest flooding last year and how to help.

Near-record precipitation last year has set the stage for renewed flooding along the Missouri River and its tributaries, according to a forecast released Thursday.

In 2019, the Missouri and Mississippi rivers and their tributaries raged through towns and farms for months.  Forecaster Kevin Low at the Missouri Basin River Forecast Center said this year could be just as bad.

“I would characterize it as grim,” said Low of the forecast. “The setup is as bad as I’ve seen it in my 30-year career.”

More rain and snow fell in the Missouri River Basin in 2019 than in all but two other years on record, leaving much of the ground in the Midwest and northern plains saturated. Low said this winter’s snowpack is fairly heavy, compounding the situation

“If we receive a normal precipitation year, then I think we’re in trouble,” said Low.

Last year’s flooding tore gaps in thousands of miles of levees. Most have been repaired, but not fully rebuilt, leaving towns and farms especially vulnerable.

But there is some good news. Low said the Army Corps of Engineers has been able to drain much of the water that had flooded upstream reservoirs, creating some storage capacity for spring runoff. And, since this winter hasn’t been as cold as last one, less ice has built up to jam the rivers.

Torrential rains hitting frozen ground triggered flooding last year, but the ground in the northern plains isn’t frozen as deeply this year. So if the relatively mild temperatures hold, the ground should be thawed in time to absorb some early spring rains.

Read the full article about flooding on the Missouri River by Frank Morris at Harvest Public Media.

Learning and benchmarking are key steps towards becoming an impact giver. If you are interested in giving with impact on Disaster Relief take a look at these selections from Giving Compass.

Disaster Relief is a fascinating topic, and others found these events, galas, conferences and volunteering opportunities aggregated by Giving Compass to be relevant for individuals with a passion for Disaster Relief.