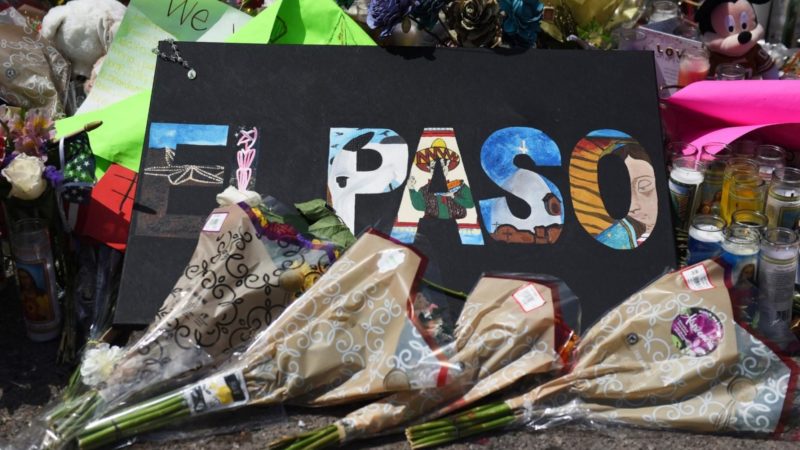 • How can funders work to implement these proven solutions?

• Read about the lasting grief after mass shootings.

Dozens of terror plots have been foiled by (PDF) members of the public in the last 20 years after a tip-off (widely known as “see something, say something” since 9/11). Mass shootings and other forms of domestic terrorism might similarly be prevented if there were wider awareness of what exactly warrants a report to law enforcement.

In some cases, would-be perpetrators have posted pictures or videos of their weapons online, along with plans. But there are indirect warning signs that might also be worth reporting, such as someone studying how to carry out mass killings more effectively; being in active contact with a terrorist or extremist organization; acquiring (or trying to acquire) weapons specifically in order to engage in violence; or undergoing training or travel to join a violent cause.

If such red flags appear in social media feeds, especially by someone a user knows is not making a joke or trolling, it also needs to be easier to forward them to law enforcement. Facebook and Twitter and the like make it easy for users to report concerning posts (e.g. for violence, terrorism or suicide), but those reports, unless the company’s reviewers discern an imminent threat, remain internal to the company, and are used simply to determine whether to delete the post or suspend the account. There is no mechanism to forward a social media post directly to law enforcement to assess whether a full investigation is warranted. Facebook’s help page on reporting inappropriate or abusive posts just tells users to contact law enforcement if they feel threatened.

Detecting, preventing, and investigating suspicious attempts to purchase or divert guns also would have an impact. There have been multiple cases in which shooters managedto acquire guns they should have been barred from buying. In other cases, suspicious activity reports about the shooter went uninvestigated. Improving how suspicious activity reports about weapons and ammunition are handed and shared between local, state, and federal agencies could help stop valuable clues from falling through the cracks.

More education on suspicious weapons acquisition would also help. Right now, the National Rifle Association maintains a large online resource on gun safety and teaches gun safety classes all over the country. Where is the equivalent training on how not to sell or give guns to persons acting suspiciously, like would-be criminals, terrorists, or straw buyers, and what to do when faced with a suspicious purchaser?

The public also needs to be told that if there’s no safe way to escape or hide during an active shooting, they need to attack the shooter with the same dedication they would use, one imagines, against someone trying to hijack or bomb an airplane, post-9/11. This mindset was exemplified by passengers’ heroic response to the “underwear bomber” on Northwest Flight Airlines 253, and the “shoe bomber” on American Airlines Flight 63.

Research has shown that shooters take an average of six seconds between gunshots, lining up their shots on victims to kill, providing windows of opportunity to confront the shooter. The FBI’s study of active shooter incidents from 2000 to 2013 shows that when someone physically attacked the shooter, there were far fewer casualties on average. Just this month, a would-be attacker at a mosque in Norway was thwarted when confronted by an elderly congregant. Though shots were fired, no one was killed and the congregant successfully seized the gun.

Read the full article about ways to address mass shootings by John S. Hollywood and Jordan Reimer at rand.org