What it Means if Buffalo Becomes a Climate Haven 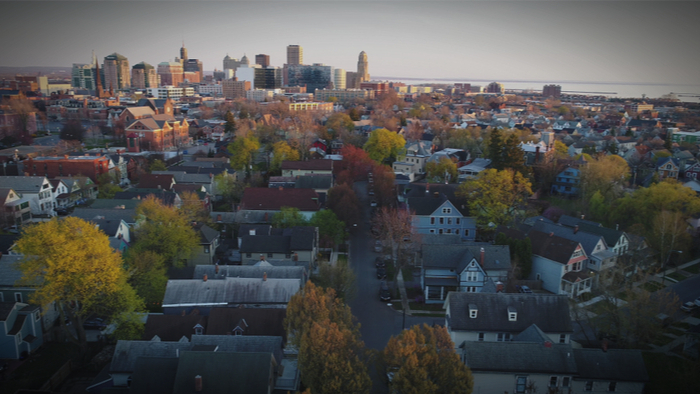 • Climate scientists have researched the history of climate in Buffalo, finding that the city can better withstand the impacts of climate change (compared to other places), and has become a haven for those displaced by climate-fueled disasters.

• What policy changes need to happen in Buffalo to sustainably support climate refugees that move to Buffalo?

• Learn more about the climate crisis, migration and refugees.

The storm marked the beginning of a long journey that took her from the convention center in San Juan to a hotel in Florida to an airport in Philadelphia, concluding with an 11-hour bus ride to Buffalo, New York — her husband had once visited the city as a teenager and remembered liking it.

Robles may not have known it when she moved in, but Buffalo is unusually well-insulated against climate change. Rising temperatures have yet to produce more heat waves or extreme rainfall in Western New York. Experts say the region’s cool climate and ample fresh water could make it an attractive destination as the planet heats up. And Buffalo has room to grow — the city’s population has dropped by half over the last 70 years of industrial decline.

These facts have not gone unnoticed. In his 2019 State of the City address, the mayor dubbed Buffalo a “Climate Refuge City.” Civic leaders are hopeful that the coming wave of climate refugees will revive Buffalo, filling its vacant lots and abandoned storefronts.

n 2016, SUNY Buffalo climate scientist Stephen Vermette set out to show how climate change had made life harder in western New York with the hope of galvanizing locals to take up arms against the carbon crisis. He scoured weather records going back to 1965 and found that temperatures have risen a little more than 2 degrees Farenheit over that time, roughly consistent with the rest of the Lower 48.

But that’s where the similarities ended. While warmer weather has fueled fires in California, hurricanes along the Gulf Coast, and flooding in the Midwest, climate change has left western New York mostly untouched. Vermette found no evidence that rainfall has grown more severe, or that heat waves have grown more frequent — Buffalo had only one 90-degree day in 2019. He said the breeze off of Lake Erie acts like a natural air conditioner, helping to keep the city cool.

Read the full article about Buffalo is a climate haven by Jeremy Deaton at CityLab.

Homeless and Housing is a complex topic, and others found these selections from the Impact Giving archive from Giving Compass to be good resources.