With No Access to Education, Rohingya Refugee Children Face an Uncertain Future 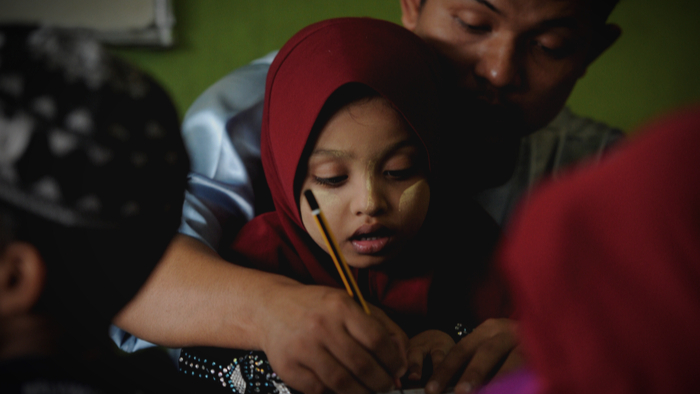 • Research shows that the longer Rohingya refugee children go without access to education, the more uncertain their future is, and the more at risk they are of becoming a lost generation.

• The author notes that Rohingya refugees are not granted official refugee status in Bangladesh, so they are not permitted to attend local schools in that country. They can attend learning center classes within the refugee camps hosted by the United Nations Children’s Fund and other partners. However, these classes are only for part of the day and are not as substantial as a high school diploma. What other options do these children have to obtain a more formal education?

•  Here are some stories about the Rohingya refugee children from the #SpaceOnEarth campaign.

The boy’s eyes lit up when he talked about his dream of becoming a doctor.

Seven-year-old “Mohammad” – not his real name – is a Rohingya Muslim from Myanmar. I met him at a learning center at a refugee camp in Cox’s Bazar, Bangladesh, in early July 2019.

“I know my dreams will never come true,” he said with a faint smile.

Mohammed is among the more than 700,000 Rohingya who have taken refuge in Bangladesh after an ethnic cleansing campaign of rape, killing and torture by the Myanmar military in mid-2017. They joined the more than 200,000 Rohingyas who had previously fled Myanmar’s brutal efforts to rid the Buddhist-majority country of this marginalized Muslim minority.

Of the newly arrived Rohingya, three-quarters are women and children, according to the United Nations.

In a noteworthy humanitarian gesture, the Bangladeshi government has given refuge to these persecuted people. Aided by Bangladeshi community organizations, various UN agencies and other international donors, the Rohingya have been receiving shelter, food, clothes and basic health care since the massive exodus in 2017.

This essential care, which cost an estimated US$920.5 million in 2019 represents a gargantuan global effort. Still, the resources are woefully inadequate.

Most Bangladeshi refugee camps are overcrowded and, as a result, unhygienic. Residents survive on the absolute bare minimum of nutrition and other necessities. Monsoon rain, cold and landslides are everyday threats for these Rohingya, as I’ve witnessed firsthand during my visits to Bangladeshi camps in 2017 and 2019.

It is a dismal existence for all. But it is the plight of the roughly 500,000 Rohingya children living in limbo that strikes me as bleakest.

Concerns of a lost generation

Research shows that future of refugee children grows more imperiled the longer they remain out of school.

In many countries that host substantial refugee populations, including Turkey, Lebanon and Uganda, the United Nation’s refugee agency and the United Nations Children’s Fund ensure children receive a quality, full-time education, either at the camps or in nearby public schools.

Even so, just 23% refugee children worldwide are enrolled in secondary school, according to the UN’s High Commission on Human Rights. Just 1% attend university.

Because Bangladeshi authorities have not granted the Rohingya official refugee status and consider them instead “forcibly displaced Myanmar nationals,” the roughly 500,000 Rohingya children in the country have no access to a formal education. Rohingya children are not permitted to attend Bangladeshi public schools.

The United Nations Children’s Fund and its partners offer Rohingya refugees aged 4 to 14 two-hour daily lessons on Burmese, English, math and life skills at about 1,600 learning centers located at the camps. These classes keep about 145,000 Rohingya children – or about 30% of the Rohingya youngsters in Bangladesh – occupied for part of the day but do not provide the kind of formal education that will allow the children to work toward a high school degree and enter the job market.

The camps offer no schooling at all for Rohingya refugee adolescents aged 15 to 18.

Some teenagers, mostly boys, have turned to madrassas, or Islamic learning centers, where they can receive a religious education.

The remaining Rohingya children who attend neither UNICEF classes nor madrassas are simply left to fill their own day. At the Rohingya camps, I saw boys working in shops, playing cards or sitting idle at all hours of the day.

When I asked Mohammad what he does when he is not in school, he told me that he “takes care of his family.”

“I play with the other kids, too,” he added with a grin.

Adolescent girls, I learned, are often kept at home by their parents because of the Rohingya’s conservative social and religious norms.

The camps can also be dangerous for girls. Human traffickers have been known to target young Rohingya women, promising them jobs outside the camps. Girls face other forms of violence and human rights abuse at Bangladesh’s camps, too, including child marriage.

Growing up in unstable conditions, with no possibility of study, Rohingya children like Mohammed are at risk of becoming a lost generation.

Their limbo may not last forever. In response to heightened international pressure, Myanmar in November 2017 agreed to take the Rohingyas back starting November 2018.

However, their return was postponed due to protests by the refugees, who feared conditions in Myanmar was not yet safe. The United Nations and other international refugee services have also voiced concern about sending the Rohingya back, saying there was no indication that the Myanmar government had punished the people responsible for the crimes in Rahkine state, nor agreed to give the Rohingya citizenship.

Considered foreigners in both Myanmar, their native country, and Bangladesh, where they’ve sought refuge, the Rohingya Muslims are the world’s largest stateless people.

While the negotiations for their repatriation continue, a generation of traumatized Rohingya children wait for their futures to begin.