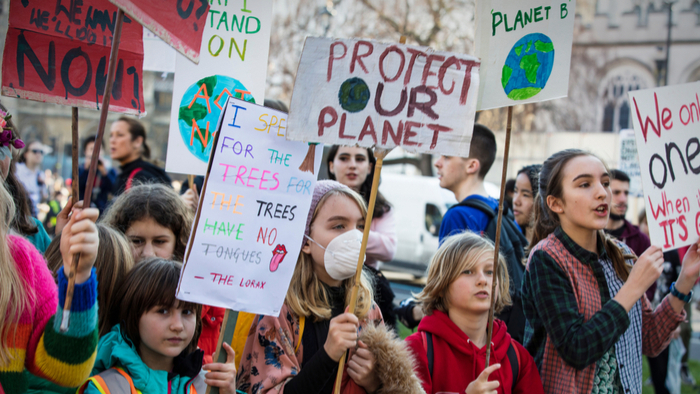 • Kaysie Brown reports on the youth-led marches occurring around the world, where students are demanding action on climate change.

• How can funders work to support and build this movement?

• Learn how to support youth organizing.

In a world of division, young people are standing up for collective action. On March 15, thousands of young people in more than 100 countries and 1,600 cities and towns will take to the streets to march for greater ambition and urgent action around climate change. Part of their rallying cry is to push global leaders to uphold their commitments on the Paris Climate Agreement, signed by 196 countries back in 2015. Sparked by 16-year-old Swedish activist, Greta Thunberg, who has unabashedly called out big businesses and politicians for ignoring the science on climate change, these protests present a historic shift in our approach to tackling urgent global challenges.

Youth climate leaders from around the world penned an open letter to leaders in advance of Friday’s strike, stating, “We are going to change the fate of humanity, whether you like it or not.” Indeed, young people are no longer accepting the status quo — they’re taking the lead now and we must listen to them.

With over 1.2 billion young people aged 15 to 24 years in the world today – accounting for 16% of the global population and the largest generation of young people in history – the active engagement and leadership of youth will be critical to achieving the Sustainable Development Goals (SDGs) and averting the most severe challenges the global community is up against. And while many of the biggest headlines have focused on young people standing up for climate action, it is just one of the many persistent threats that youth face — and that the world can’t afford to ignore.

Learning and benchmarking are key steps towards becoming an impact giver. If you are interested in giving with impact on Nonprofit Sector take a look at these selections from Giving Compass.