How Does Climate Change Affect Oceans? 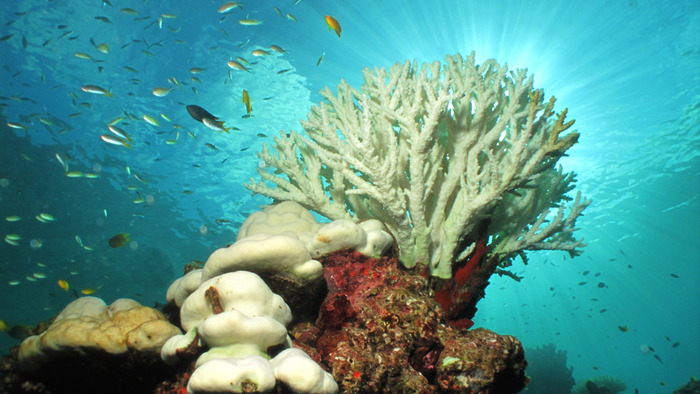 Oceans are a vital part of the earth’s ecosystem and are under threat from climate change. As more greenhouse gases are released into the atmosphere, the planet is warming. The oceans and the life they support are being affected by rising water temperatures, ocean acidification, retreating arctic sea ice, sea-level rise, flooding, coastal erosion, and more. It is putting marine life at risk and threaten the productivity of coastal populations.

While these terms may sound familiar, it’s not always clear how human-induced climate change impacts the oceans. Here are some of the biggest threats that oceans face.

Human activity has increased the emissions of greenhouse gases, one of the most well known gases being carbon dioxide (CO2). Oceans absorb much of this carbon dioxide which causes a chemical reaction, resulting in reduced seawater pH, the reduced carbonate ion concentration, and reduced saturation state of important calcium carbonate minerals. This process is called ocean acidification.

Calcium carbonate minerals are essential building blocks for skeletons and shells of marine species. The most commonly known animal affected by this is coral. Low amounts of calcium carbonate make it harder for corals to build their skeletons, and coral is a keystone species in maintaining some of the most biodiverse habitats on earth.

The ocean has soaked up between 20 and 30 percent of human-induced carbon emissions, not only causing ocean acidification but also raising the temperature of the water as well. This rise in temperature affects species of fish and microorganisms. Coral is affected by this, as high water temperatures cause coral to expel algae living inside their tissues, a process otherwise known as coral bleaching.

Nearly 1 million species are at risk of extinction from human activities. Declining biodiversity affects food production, clean water and carbon sequestration. A new report by the Intergovernmental Science-Policy Platform on Biodiversity and Ecosystem Services finds that about 66% of the marine environment has been significantly altered by human actions. More than 40% of amphibian species, 33% of reef forming corals and a third of all marine mammals are threatened. A lack of biodiversity impacts whole ecosystems, from the very bottom of the food chain all the way up to important fish species, a lack of which will threaten food security in many communities.

The rise in temperature also has devastating effects on land. Due to warmer oceans, hurricanes are becoming more intense. Studies estimated that Hurricane Florence would bring 50% more rainfall due to climate change. While there is not a scientific consensus about whether climate change could cause the frequency of hurricanes to increase or just the severity of hurricanes to increase, warming temperatures have been linked with negative changes in hurricane patterns that will impact coastal areas.

Ice caps provide vital services such as habitat, freshwater, and the uptake and redistribution of carbon dioxide. However, as the earth’s temperature rises, the polar ice caps are melting at an alarming rate.

A major issue of rising temperatures and melting ice caps is that together they cause a rise in sea levels, which will start mass migration and destroy many coastal communities. Coastal property and infrastructure will have lasting damage, and some reports estimate that parts of Bangkok and Ho Chi Minh City will be underwater by 2050.

What We Can Do

There are many steps that cities can take to prepare for and mitigate the impacts of rising sea levels. Vietnam is expected to spend $345 million on anti-flood projects that would protect the downtown area of Ho Chi Minh City and part of the suburbs. However, these changes can only prepare communities so much.

To prevent further damage to the oceans and the life they support, we have to look toward long-term solutions that decrease humanity’s impact on the environment. It starts with what we do on land that releases greenhouse gases into the atmosphere. By curbing our output it may not be too late to save the oceans.

Learning with others and benchmarking are key steps towards becoming an impact giver. If you are interested in giving with impact for Climate, take a look at these events, galas, conferences and volunteering opportunities to connect with individuals like you.