After a week in the Bahamas with our wonderful partners at the Cape Eleuthera Institute, this weekend we managed to achieve history—tagging an animal from a submersible (submarine) for the first time—EVER.

Our objective was the deep-sea shark, the bluntnose sixgill. This ancient species predates most dinosaurs, and is a dominant predator of the deep sea ecosystem. The lead scientist on the mission, FSU Marine Lab’s Dr. Dean Grubbs, has been the first to put a satellite tag on one of these elusive sharks, but until now had only been able to do so by bringing them up to the surface.

Because bluntnose sixgills are a deep sea species, it’s hard on them physiologically to be tagged in this way. In their typical life cycle, they won’t experience daylight, and very rarely will they feel the low pressure, warmer temperatures of surface waters. Typically, the data obtained after surface tagging of a six gill is believed to be skewed, as the shark does not return to its natural behaviors for some time after the tagging.

The journey to get here has been incredibly long and complex. The idea first started when Dr. Grubbs, along with researchers Edd Brooks and Brendan Talwar of CEI, were pondering the return of Alucia (OceanX’s research vessel) to the Bahamas.

The Idea: Tagging A Shark from an Ocean Sub

A harebrained idea (“what if we tagged a shark from the submersible?”) turned into an experiment with a shark carcass in a pond and a subsequent first real attempt in August 2018. On that trip, a gorgeous big sixgill came in to check out the sub, but she rolled her belly at the last second. Although sixgills are massive (they can grow up to eight meters long, and on average are larger than great whites), the area suitable for applying the satellite tag is much more exact—about the size of an iPad.

The second attempt was February of this year. A large sixgill came in, we pulled the trigger… and the speargun did not fire.

Needless to say, when we knew there was one more opportunity for Alucia to visit Bahamas after her end-to-end survey of the Florida Keys, we decided that this one would be “third time’s the charm.” 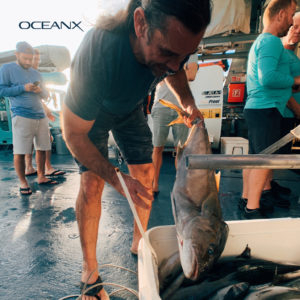 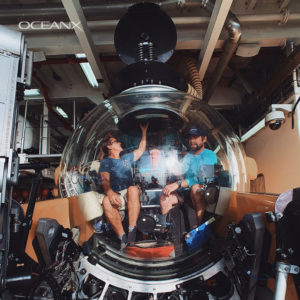 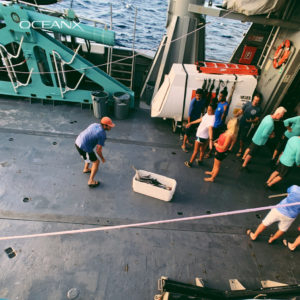 In many ways, we had set ourselves up by promising the world that this would be it. In spite of making incremental improvements on the last two missions (which is basically how science goes), who knows if the third time really would be the charm?

After a mobe day (mobilization) in Cape Eleuthera, our first dive was on June 26. The CEI crew had laid a packed crate full of bait on the sea floor that morning. By the time the sub descended, the area was full of sharks.

The reason we only did these dives at night was because sixgills have a diurnal migration route. We selected the crate and the dive site so that we could catch them on their daily travels from the deep deep sea to shallower waters (bluntnose sixgills are usually found between 800—1,100m, but can be found at more than twice those depths).

The first night there were bluntnose sixgills everywhere. We lined up the shot, fired the tag… and it bounced off the female sixgill’s skin. On night two, we made the relevant adjustments… but no sharks showed up. Night three: The sharks were back, and we were very excited to deploy the tag. Unfortunately a large grouper came and tagged itself (exactly in the correct tagging position. So we may have grouper tag info in a couple of months, unless a sixgill eats it). 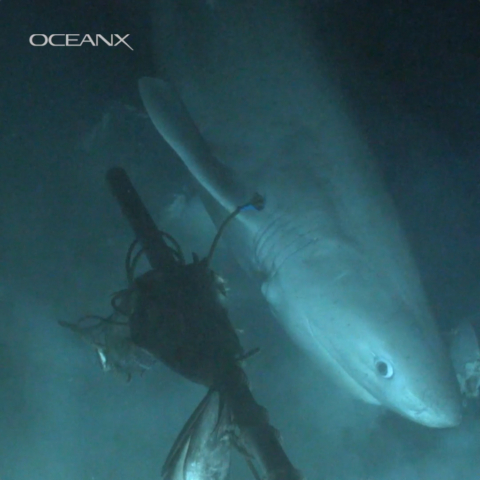 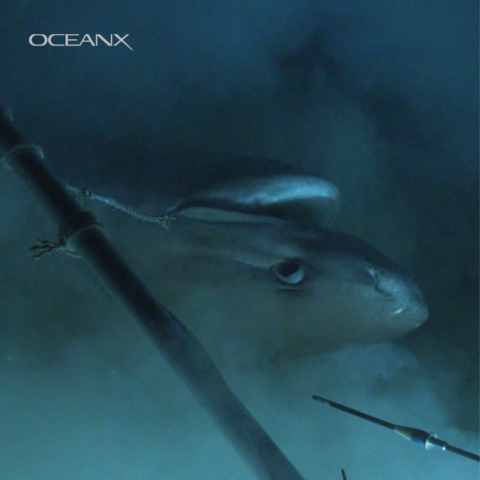 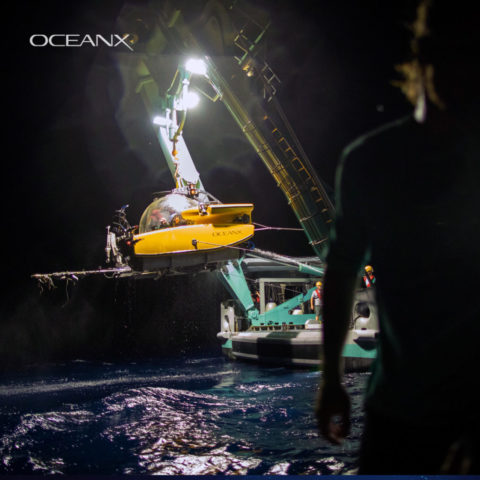 Retrieving the submersible after a tagging attempt.

Finally, it’s our fourth and last night. By now, we’ve been through about 300 pounds of bait. It’s lashed daily to a long pole in front of the sub, carefully designed to help the six gills align their flanks with the spearguns. Everyone was nervous, although no one was saying it. As if to accentuate the moment, during the sub launch, an end-of-days level of downpour ended as soon as the sub was in the water.

The submersible sinking beneath the surface as the rain stops.

With nothing to do but wait, we made nervous jokes in mission control, where radio updates come up from the sub. (At this stage that’s the most advanced communications we have with underwater, although we’re going to be changing that soon). On previous dives, we’d noticed a trend of the sharks showing up around 9:50 pm—aka “sixgill o’clock.” On this day, they were right on time.

A Historic Success for Ocean Science

We got an update that a tag had been fired, but there was too much silt to see if it had gone in. Again, more nervous jokes. We waited on tenterhooks as the sub team member on topside communication signaled that an update was incoming. We waited, only for him to say, “Wait, Nadir—can you repeat that?” Twenty seconds later, we heard, “Roger, Nadir. Tag went in to a large male.” Cheering ensued.

The team came back to a hero’s welcome and a watch party of the footage in mission control.

This is historic for a variety of reasons. Now that we’ve proven this method can work for the sixgill, we can unlock the world of leviathan deep-sea dwellers and gain insights into their behavior.

This ocean science initiative was achieved as part of our ongoing partnership with the Bloomberg Philanthropies’ Vibrant Oceans Initiative and the Moore Charitable Foundation.

Last night, #oceanx with partners and scientists from Cape Eleuthera Institute, Florida State University Marine Lab, The Moore Charitable Foundation and Bloomberg Philanthropies Vibrant Oceans Initiative became the first to tag a deep-sea shark from a submersible. This is historic for a number of reasons. Dr. Dean Grubbs, the lead scientist on this mission, is the first scientist to ever tag a bluntnose sixgill with a satellite tag, but up until last night had only been able to do so by bringing them up to the surface. Because bluntnose sixgills are a deepsea species, it's hard on them physiologically to be tagged in this way. Now that we've proven this method can work for deep sea species like the sixgill, we can unlock the world of leviathan deep-sea dwellers and gain important insights into their movement and behavior. It could not have been a tenser mission—this was our last chance, after one dive where the tag bounced off the shark, one dive where no sharks showed up, and one dive where a grouper came and tagged itself instead. Needless to say, the mood on #Alucia right now is ecstatic. Check out our Instagram for live updates, @oceanx.

Inspiring Stories is a fascinating topic, and others found these events, galas, conferences and volunteering opportunities aggregated by Giving Compass to be relevant for individuals with a passion for Inspiring Stories.