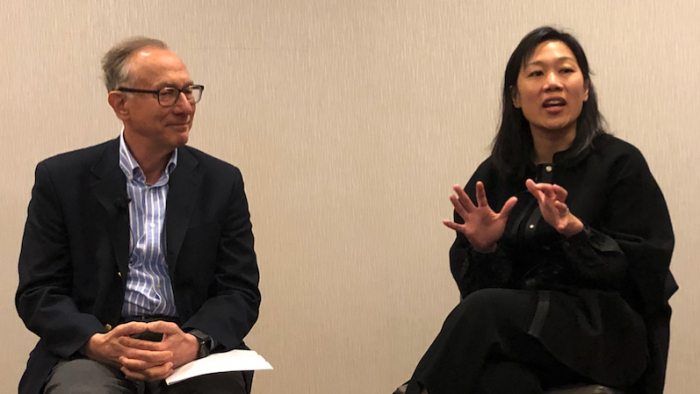 At a recent Science Philanthropy Alliance member meeting, Harvey Fineberg, president of the Gordon and Betty Moore Foundation, spoke with Priscilla Chan, co-founder of the Chan Zuckerberg Initiative (CZI), about supporting scientific research. The following is a summary of their conversation, edited for brevity and clarity.

"Science gives me hope...Scientific research enables us to move forward in finding treatments and cures; it’s a source of solutions and hope for families" - Priscilla Chan

Harvey Fineberg: When you started the Chan Zuckerberg Initiative, you had a lot of freedom in what you chose to support in your philanthropy. Why did you and Mark put $3 billion into science?

Priscilla Chan: Science gives me hope. As a pediatrician, I saw firsthand how frustrating and heartbreaking it can be for families struggling with devastating diseases. Scientific research enables us to move forward in finding treatments and cures; it’s a source of solutions and hope for families and their loved ones.

HF: I was at the launch of CZI, where you set a lofty, aspirational goal: to cure, prevent, or manage all disease by the end of the century. That’s a great destination, but where and how did you start?

PC: Based on the arc of history, curing, preventing or managing all diseases is actually a reasonable aspiration. We know that curing all disease isn’t something CZI can accomplish alone, which is why we work closely with the scientific community in everything that we do. Eighty years ago, people didn’t use antibiotics. Now, it’s common practice in medicine. In 2014, when I finished my pediatric residency, spinal muscular atrophy (SMA) — a top genetic cause for death in infants — would have been a death sentence. Today, just a few short years later, children with SMA are thriving because of scientific research and the development of a new, effective treatment.

When Mark and I looked at investing in science, it was crucial that we build things that would lift all boats, so our focus is to accelerate fundamental scientific research and discovery. Mark and I also thought about what other unique skills we could bring to the table from our first careers in medicine and technology. My experience as a medical practitioner helps me understand barriers to solving problems, while Mark’s expertise in technology helps software engineering teams at CZI develop tools that enable scientists do their work faster and better. By professionalizing scientific software and deploying it at scale, we can improve scientists’ efficiency, creativity, and output.

HF: Observers have noted that building a substantial capacity of engineering tailored for scientists is a critical, distinctive feature of CZI’s work in science. Should the strategy of adding computational expertise be adopted more broadly in science?

PC: Working with scientists to develop tools and technologies that accelerate their work is a huge part of our strategy in science. CZI’s Head of Science, Cori Bargmann, and Head of Engineering, Phil Smoot, work closely together in thinking about how to create effective scientific tools.

One of our biggest bets is supporting the Human Cell Atlas, a global, scientist-led effort to map and characterize all cells in the healthy human body. We don’t know exactly how many trillions of cells there are in the human body, or what characteristics they have, which makes research and therapeutics less effective than they could be. The Human Cell Atlas aims to map all cells in the healthy human body to create a new, fundamental resource for studying health and disease. CZI funds scientists who are contributing research to the Atlas, and we’re also working with international genomics leaders to jointly build a unified data coordination platform to enable data sharing across researchers and research institutes. We’re proud to work hand-in-hand with scientists, institutions, and engineers around the world to make the Human Cell Atlas a reality.

About half of our organization consists of engineers. And yet our engineers alone can’t meet all the demand that they see for their skills, so we give grants to groups and individuals building open-source software that supports the whole scientific field. The potential for leveraging technology to accelerate science is enormous, and there’s plenty of room for others to participate in this effort.

HF: What model do you think works best: combining deep computation expertise with deep scientific expertise, or training people to bridge the gap?

PC: Having people who can interface between science and technology is key, and we now have a team of computational biologists that acts as a bridge between scientists and engineers. We hire from a diverse pool of candidates that includes both academia and industry. One of our computational biologists was most recently working at a company that recommends jeans and clothes and sends them to customers. When he joined CZI, he was excited to combine the engineering skills he learned at a consumer-facing company with his academic background in computational biology to help work towards CZI’s ambitious mission to cure, prevent or manage all disease.

PC: Yes! Our computational biologists go out into the field and into labs to learn about what scientists are doing and what tools and improvements they’d like to see. They advise on projects and help write code, as well as form new partnerships. They are the explorers who identify what has potential, and as we build tools, they continue to sit at the intersection of science and technology—much like product managers in the tech world, but with more domain expertise. Computational biologists are incredibly valuable to our work at CZI.

HF: One project that your engineering team works on is IDseq — can you tell us about that project?

PC: IDseq is an open-source, cloud-based analysis platform that has the potential to transform our ability to detect and respond to infectious disease outbreaks around the world. It began as a research project at the UC San Francisco lab of Dr. Joseph DeRisi, co-president of the Chan Zuckerberg Biohub, who is also a professor of biochemistry and biophysics at UC San Francisco. IDseq works by rapidly combing through terabytes of metagenomic data for pathogens — be it bacteria, a virus, fungus, or even a parasite – in a given sample. CZI is teaming up with the Biohub and the Bill & Melinda Gates Foundation to train global health workers to begin using this tool in their own countries.

HF: It’s a wonderful philanthropic and implementation strategy, and the science is amazing, with potentially significant contributions to ecological mapping of the distribution of organisms. You could, for example, map influenza and find out in what species it is appearing, in what places, and at what time.

PC: We’re excited that this tool is already showing promise in the field. Dr. Senjuti Saha of the Child Health Research Foundation in Dhaka, Bangladesh, used IDseq to identify pathogens in her local community. She found the presence of the mosquito-borne viral chikungunya disease in the spinal fluid of patients at the largest pediatric hospital in Bangladesh. Based on this information, follow-up testing identified additional cases of neuroinvasive chikungunya from the same time period that were previously labeled “mystery cases.”

HF: CZI spends $3 billion on scientific research over 10 years. The National Institutes of Health (NIH), however, invests 10 times as much every year. Given the scale of government investment, what tools or capacities does private philanthropy have that government cannot muster easily?

PC: We can’t do this alone; we need government investment in science, and CZI’s grantmaking is only a drop in the bucket. While we are intentionally thoughtful, we also have the ability to implement solutions faster. For instance, we recently issued an open call for applications in the field of neurodegeneration, and completed the funding process in a year.

Another example is a mouse cell atlas spearheaded by Chan Zuckerberg Biohub co-president Dr. Stephen Quake. He worked with a number of scientists to build the first complete copy of a mouse cell atlas in only four months, and then published the research on the preprint server bioRXiv shortly after. We are in a unique position to invest in high-risk, high-reward research, and I think we shouldn’t be batting a thousand.

HF: Risk-taking, speed, combining engineering and science, flexibility, and strategic innovation; all these things can be pulled together by philanthropy.

PC: Yes, those are great descriptors for what we try to do.

HF: Can you talk about your early decisions on how to structure your philanthropy? You and Mark chose to create a limited liability corporation (or LLC) as your primary vehicle. What was the reason you chose this?

PC: We put a lot of thought into setting up CZI this way. Forming the way we have, as a sort of holding company with other funding vehicles like a 501(c)3 and a 501(c)4 within it, allows us to do traditional grantmaking, but also to support any idea that could make a real difference in people’s lives, regardless of whether the structure of the organization we’re supporting is non-profit or for-profit. We’re trying to solve big problems creatively, and this structure allows us make the most impact.

HF: How has the Science Philanthropy Alliance helped you as you were thinking about your philanthropy in its early stages?

PC: CZI grew up at the same time as the Alliance. We were fortunate to access Marc Kastner’s and Valerie Conn’s advice. Mark and I spent six or more months just asking questions about what can we do in science—we talked to people all across academia and industry. The Alliance was incredibly helpful in our early education in science and helping us think about how we engage in this space. We are very grateful for our ongoing partnership with the Alliance.

If you are interested in Diseases and Cures, please see these relevant events, training, conferences or volunteering opportunities the Giving Compass team recommends.

If you are interested in Diseases and Cures, please see these relevant Issue Funds, Charitable Organizations or Projects where you can get involved.