Carry The Future Hand-Delivers Hope and Necessities to Refugees 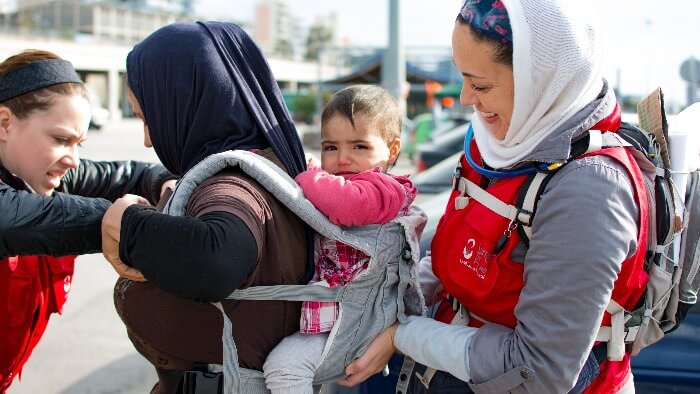 Like many of us in September 2015, Cristal Logothetis saw the tragic image of Alan Kurdi, the 3-year-old Syrian boy who drowned during his family’s journey to seek refuge in Greece.

Logothetis knew she had to do something, so she logged onto Facebook and asked for donations of new and gently used baby carriers. And just like that, a grassroots movement to bring necessary supplies to refugee families was born. She didn’t know then that her call to action would launch a worldwide organization called Carry the Future (CTF), an all-volunteer nonprofit that still heavily relies on social media.

Volunteers like Erin Leonard and Jill Thomas were drawn to CTF because they had watched the refugee crisis unfold and felt “hopeless” – until they saw that one mom was taking matters into her own hands.

“I think we have 90 to 95 percent moms running [CTF],” said Laura Sieckmann, CTF’s chief communications officer, who was days away from her due date and caring for her kids when she spoke to Giving Compass.

Parents seem to connect to the mission not only because of the type of aid and the target population, but also because of the methods of delivery. To avoid traditional impediments to the aid process, volunteers take trips to refugee camps where they hand-deliver baby carriers, baby beds, and other supplies as requested.

Thomas, who serves as a baby bed coordinator, shared her experience of meeting refugees face-to-face.

“I am always so struck with how giving [the refugees] are,” Thomas said. “On my first trip we were fitting a baby carrier on a mom … and she had four kids that were probably under the age of 6. Maybe one toy for all kids. She pulls out from underneath her bed – like the bottom of a box – and there were four oranges in it. There were two of us and she tried to give us each an orange. And the kids were looking at us, and looking at the oranges. Here’s this mom and she’s offering us her oranges, the last of her food. And that’s what it’s like.”

Thomas has been on seven trips, and is planning an eighth. “I don’t know what I would be like. I don’t know if I’d give my last oranges if I had four kids and four oranges. I would hope that I would,” she said. (Her service record suggests that she would offer without hesitation.)

To date, CTF has delivered more than 14,000 baby carriers to Syrian refugees in Greece, France, Serbia, and the U.K. The organization also provides baby beds with diapers, wipes, pads, and clothes to families housed in camps. They have responded to calls for food and warm clothing, filling gaps left by other organizations.

CTF also helps refugees who have been moved out of camps but often continue to struggle. Volunteers throw “Diaper Parties” to collect diapers to serve refugees’ needs in their own communities and donations to buy diapers for refugees aboard. They aim to serve refugees from all over the world on an ongoing basis.

What’s Next for Carry the Future?

Winning the Starbucks Upstanders challenge and $25,000 prize opened a new door for CTF: providing assistance to the Rohingya in Bangladesh. Volunteers have watched the situation in Myanmar develop with heavy hearts. The energy around the project is palpable and volunteers are eager to bring hope, love, and baby carriers to Bangladesh.

According to Sieckmann, “There’s a lot of great things to come for us. We’re kind of at a crossroads it’s either, you know, go big or go home. And everybody is putting their hands in.”